THIS IS A SMALL SAMPLING OF WHAT WE HAVE IN OUR STORE
To get the “right fit”, color or style… special request orders are always encouraged and at no additional cost. Restocking orders and special requests are placed every Tuesday and Friday. 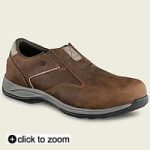 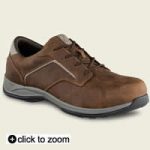 THE HISTORY BEHIND THE BECKMAN STYLE
In the early twentieth century, Red Wing, Minnesota had only a few dirt roads. In the winter, or after a good rain, those streets would get muddy, making a good pair of boots a necessity. But our founder, Charles Beckman, a respectable businessman, wanted a pair he could brush off and wear right into his shoe store on Main Street. So that’s what his Red Wing Shoe Company made—sturdy, versatile footwear that could take some abuse and still look good. And that’s the kind of shoes and boots we’ve been making ever since. 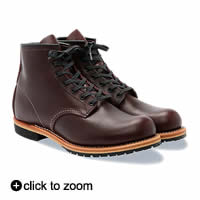 Part of the Beckman collection, the 9011 is a 6-Inch, round toe style boot made from our exclusive Black Cherry Featherstone dress leather. Classic in look, a bit of polish keeps them looking sharp.

THE HISTORY BEHIND THE IRON RANGER STYLE
The early history of iron mining on Minnesota’s Mesabi Range is intertwined with that of Red Wing Shoe Company. The miners needed tough but comfortable boots that could stand up to the long days and tough conditions a northern Minnesota mine pit presented. Red Wing responded with a boot made of thick leather with an oil resisting outer sole, speed lacing hooks, and a comfortable cork midsole. The defining characteristic of these boots though, was their double layered toe, capped to protect the miner’s feet from injury as they labored with hand tools and heavy machinery. That boot is still made today, the fittingly named Iron Ranger, and it represents not only Red Wing’s commitment to making boots for working men and women but also its Minnesota origins. 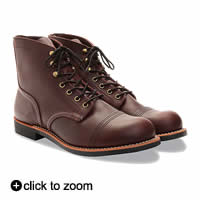 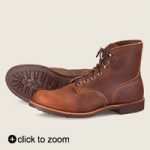 The Iron Ranger 885 is a rugged 6-Inch boot. The Iron Ranger was originally built for iron miners in the 1930s. In the decades since, it has grown indispensable for owners from all walks of life thanks to its iconic style and longevity. The six-inch boot’s signature feature is a leather toe cap that is as distinctive as it is durable. Each pair develops a personalized fit and custom comfort over time thanks to leather insoles and a cork midsole that form to feet. The boots are built with a Goodyear welt and Puritan triple-stitch construction, and brass speed hooks provide precision lacing and a visual hit of hardware. The Iron Ranger is anchored with a Vibram® 430 Mini-lug outsole. 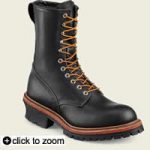 This proven workhorse is built on a durable, heavy-duty Goodyear® welt construction platform with a very aggressive lug sole. LoggerMax is the preferred choice for getting through long hours in work environments where absolute traction and stability are a must, such as those found in forestry and the oil and gas industry. The sole is also oil, gas and heat-resistant. 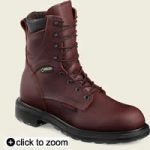 We’re Here for You